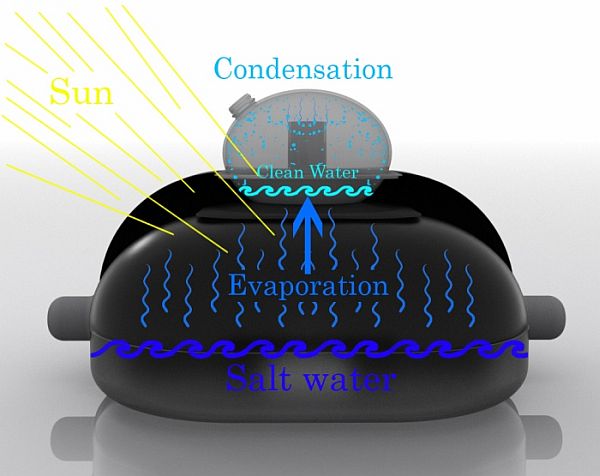 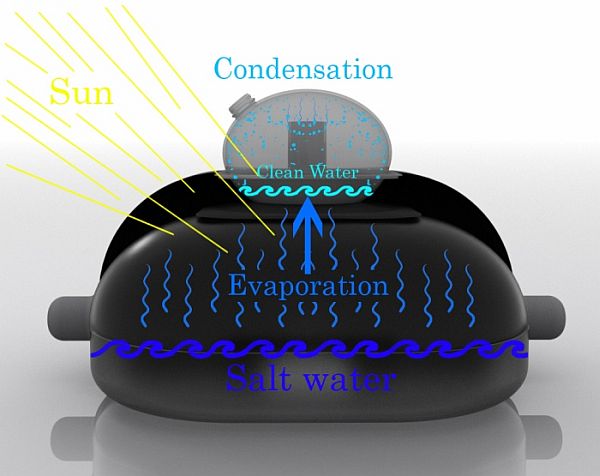 It isn’t a secret anymore that most places are running out of fresh water, and that hasn’t brought the costs of desalination plants down. But the innovative minds all about the place have used simple, low cost, low tech and low effort methods to give us wonderful devices that help the lower side of the economy with the fresh water issue. Here’s a look at how these are made, and work, and the kind of investment that one has to make in order to avail of the facilities, which again, is pretty low, and so nothing to worry about.

This is a design, and now also a prototype that was brought forward by Gabriele Diamanti. Apparently, it’s a cost efficient and portable device that works on solar power, and is capable of providing at least 5 liters of drinking water a day. A result of the efforts that were a part of a competition, the Prix Emile Hermes competition, the Eliodomestico has all the qualities that helped it place itself firmly among the finalists. This easy to use and maintain device makes itself a potential hot cake because, not only was this made from materials that are available commonly, but also, with the absence of a filter, and a no electricity design, it makes a comfortable desalination unit for the common man.

This particular concept has a lot to say for itself. Made from UV resistant plastic, this cone, must be placed over a pan of salty or muddy water, helps make at least one liter of fresh water per day. When the cone is placed over a dish of water, and left out in the sun, all the water from the dish evaporates and settles on the inner surface of the cone. It can then be condensed and stored in bottles. Well, that’s how it works. Also, being light in weight, it can float. So, there’s no real necessity of a dish or a pan. It can be made to float on water directly, and the water can be collected whenever it starts condensing. Innovative, isn’t it? And apart from being innovative, it’s also cost efficient, with the cone being prices at 20 Euros, what with the plastic being good enough to be used for about 5 years.

This device is supposed to be a wonder, in a way to say. The Slingshot, as it is called, works on the concept of vapor compression distillation, and it is said to make perfectly drinkable water out of even chemical waste and sewage, let alone just salt water. The creator of this machine, Dean Kamen has not really told us much about when the Slingshot would start selling in stores, but one thing is for sure. And that is, that all those areas that have been affected due to the lack of good, clean drinking water will have something to watch out for.

Water, water everywhere, nor any drop to drink. This is what Coleridge said on a ship, but this is also what the Haitians say, due to the fact that their island happens to be surrounded by water, but ironically, they are suffering from a scarcity of fresh drinking water. And so Joe Kasper came up with this concept that is very similar to the stuff we already talked about, and uses evaporation to produce fresh water from brine. It consists of two jars, one on top of the other, and the bottom jar painted black to absorb more heat from the sun’s rays. The water evaporates twice, once in each jar, and finally comes out as fresh water after it is condensed.

The Sea Kettle isn’t just another water desalination unit – it’s also a life raft. From what we hear, this raft has its own unit to produce up to 3 liters of fresh water a day from the sea water. The concept, it seems, is very similar to that of the Watercone, another desalination device.