Some efficient projects have been worked out to generate power utilizing alternative sources of energy efficiently. They have many advantages over the power plants that are functional in present scenario. They are not cumbersome and are not a hindrance to the ecosystem. they are cost effective too.

Some of them are as follows: An example of utilizing wind energy can be seen in the North Sea. Floating wind farm has been established in The North Sea by Norwegian energy group Norsk Hydro and German engineering firm Siemens. This is a unique kind of oceanic wind-farm in which wind turbines is installed in deep water (between 200-700m) utilizing oceanic winds for generating power. Power generated from this wind farm is self sufficient to fulfill the energy requirements of the surrounding area.

The reason behind selecting the North Sea for establishing the wind farm is the speed of wind. Here the velocity of wind blown is much greater than that of land which is favorable in generating power more efficiently. The future goal is to establish a large scale off shore wind farm with 200 wind turbines capable of producing up to 4 terawatt hours per year.

Magenn Power Air rotor system is an example of flying wind turbine established at Ottawa, Canada. It is held up by helium. It works on the principle of straight lift from the helium and the “Magnus effect”. Here as speed of wind increases, rotation of the rotors increases, which in turn will increases the lift of the turbine. This will help in reducing the leaning effect and provide stability to the suspended turbine at higher altitude. 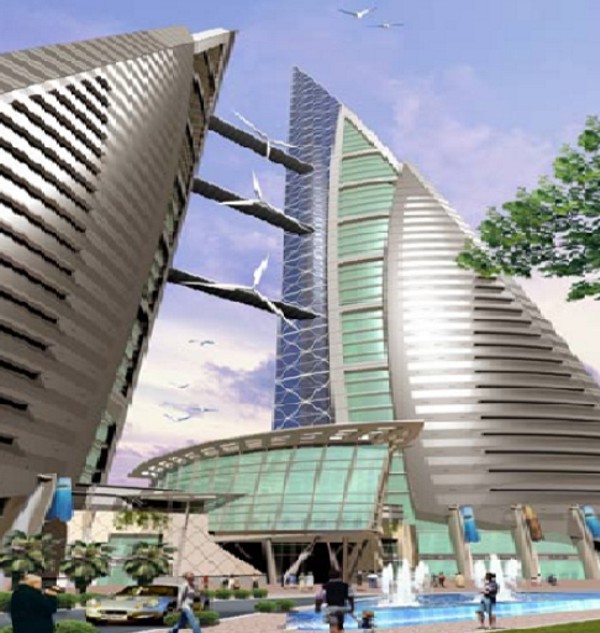 A beautiful building under construction in Middle east is an amazing example of using wind energy. This building has integrated wind turbines in the structure of the building.

Bahrain world trace centre located in Middle east is a beautiful high-tech structure. This building is energy-independent because of their wind turbines which is located in plain view between two towers. Thus making it power efficient. One of the first tidal power station is located in New York City, East River near Roosevelt Island. This plant currently consists of 35-killowatt turbines with plans expanding it to a total of 100 turbines. It utilizes tidal energy for generating power.

Northern Ireland has also established 1.2 MW tidal power plant. It is a functioning as a test run for the ocean-bound turbines. Marine Turbines company is also working on several tidal power projects, for example “Seagen” – this tidal power station has a capacity of 1MW power production.

A tidal power station has an advantage of continuous favorable wind conditions over land based wind farms. It is a limitless power source which can be exploited to its full extent because tides are available. One of the most readily available energy sources is Solar energy. One amazing example of utilization of solar energy can be seen in Seville, Spain. Europe’s first commercial solar power station is established here by Solucar Company. It is a 40 story; 300 ft tower, surrounded by 624 photovoltaic panels, generating more than 11 MW. It provides power to more than 60,000 homes of Seville.

This Solar Power station uses the solar light which is being reflected from the fields of panels being reflected to the top of the tower, which then heats water within the tower to produce steam which in turn provide generate power. Some solar towers in Daggett, California are generating power up to 10 MW.