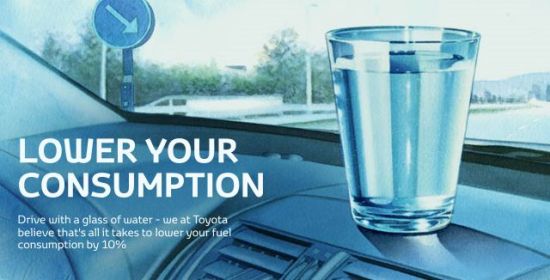 Toyota has tossed a bizarre fuel saving concept and much obviously. After all it would be unfair to rely on company’s technological ingenuity alone to bring about tangible cuts in fuel consumption especially when there’s something called ethical driving too. And what better way to direct a fair appeal than this one. The whole idea is rather playful.

You have to conjure up the image of a glassful of water and then push yourself to prevent any spillage through decent and sensible driving. That includes, accelerating with graceful ease, leaving plenty of distance between you and the vehicle ahead, and braking gently. This alone Toyota believes could help in slashing down fuel consumption rates by 10% besides making better drivers out of us.

For all the geeky nerds addicted to using various apps the automaker has introduced an app called – ”A Glass of Water” to record your driving distance, time, fuel consumption and water spilled.