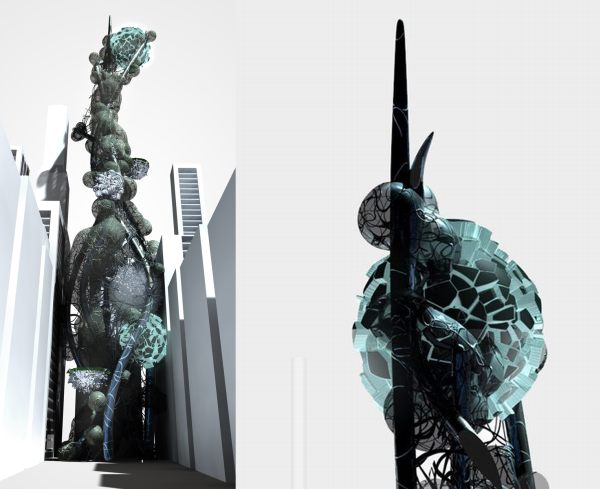 Modern architecture suggests many shapes and sizes for the betterment of the existing construction practices. Many of these have found their way into the record books for their ingenuity and uniqueness. These marvels claim themselves to be futuristic and being generations ahead of their counterparts in terms of design and planning.

So, here are some Polish architecture students who are struck by a brainwave that have left the most imaginative architects of the world gasping.

Karolina Czochańska, Emilia Dekarz, Paweł Dudko and Justyna Krupkowska believe that the future lies in corporations retreating to the virtual world. It’s a world, where communications reach a height to ask people not to commute from work. Now based on this thinking, let your imagination run riot. Imagine a giant, amorphous algae vine swallowing a traditional skyscraper. Now imagine living inside that growth. Impossible? Possible says these Polish architecture students.

Calling it the Saprophyte design, the students have combined biology and architecture – biomorphic architecture — and conceptualized a living mass that is much better than typical skyscraper structures. The transformable structure offers a myriad ways to shrink, grow, split, or change the existing setup in any way as desired by the residents. That’s not all. The bio mass is self-duplicating meaning new buildings effortlessly appear out of the original like flowers.

The students arrived upon the idea by studying biomimicry and asking themselves what they could learn from nature. They searched for an architectural idea that was both economical and effective and based on the principles of self-sufficiency and energy efficiency.

What about the sustainability of such a structure ? Well, the students have a very logical answer to give. Because the structure is an alga, a living plant, it will itself be able to harness all the positive attributes that come from plant processes. The building’s ‘skin’ will create its own green space, clean the air, store water and store electricity.

If the students have their way, the urban centers of the future would be the ultimate “green” living environs. Yes that’s the power of Saprophytes.