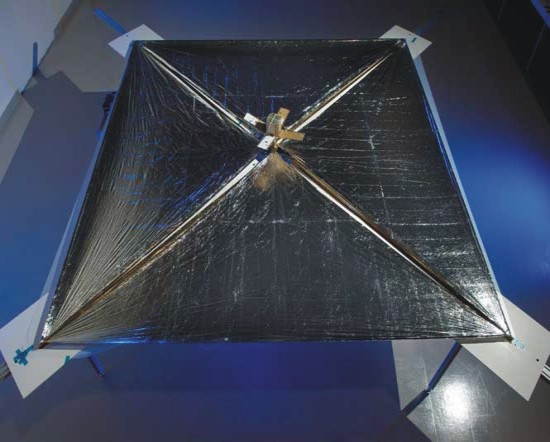 NASA is attempting to deploy and operate its first solar-sail powered craft NanoSail-D, made of extremely lightweight gossamer fabric designed to glide into space. It uses sunlight to propel vehicles through space, the way the wind pushes a sailboat through water. Hoping the sails will eventually boost long-range missions into deep space with the help of lasers on Earth firing light into their sails.

The technology requires seizing the constantly streaming solar energy, called photons, with giant, reflective sails of lightweight material. The continuous pressure of the sun’s light provides sufficient thrust for a small spacecraft to travel in space and alter its orbit. The Rube Goldberg-like method is used to arrange the sail that involves burning fishing line at critical moments to release the spring-loaded a sail, shown off in the above video.

NanoSail-D is to be launched aboard a Space Exploration Technologies (SpaceX) Falcon rocket at July 29. From launch to the orbit, the NanoSail-D flight is anticipated to last under two weeks. Its indeed a a pleasure to see the launch window approaching for a solar sail deployment experiment in space, led by Montgomery’s team and counterparts at NASA.