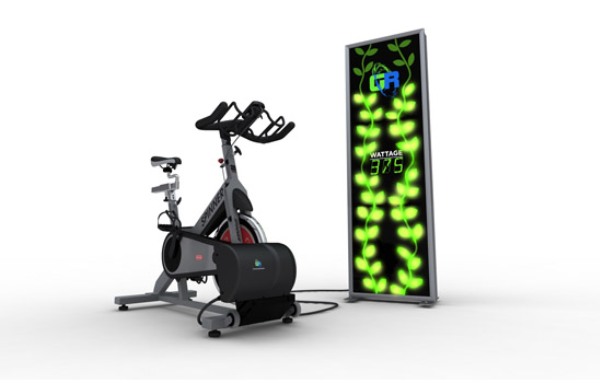 Now you too can contribute to the much talked about green revolution. Here we are neither talking about solar panels nor wind mills. It’s all about human power. Have you ever thought how much of our energy is drained while working out in a gym? But now, you can utilize that energy in a much better way by contributing to the grid. Known as the Green Revolution, this ground breaking idea is introduced by the founder and CEO of Green Revolution, Jay Whelan. Whelan is of the opinion that a group of 20 bikes has a capability of producing 3600 kilowatt hours of electricity that can light up 72 homes sustaining for a month. The Ridgefield Fitness Club is the one which has already put the idea into practice to jazz it up with green energy. It is the first gym to implement such a clean and green concept. The club’s cycling studio that is equipped with 17 indoor cycles is attached to the electrical grid through an inverted so that the energy generated by way of exercise can be optimally utilized. Moreover, any excess power generated can be stored for other uses. This inspiring concept works with a smart application of kinetic energy, which has the potency to alter the health club industry. The Green Revolution, true to its name, is also a good source of cleaner and greener energy that gives dual benefit of sustainability and a healthy lifestyle. According to Jay Whelan, traditionally a home consumes about 600 kilowatts of power for lighting each year. For deriving this much of energy, a group cycling class consisting of 20 bikes that operates four classes a day is enough to produce 600 kilowatts in just two months. That’s undoubtedly a good deal. The green technology is compatible with all the well-known brands of indoor cycles. It also offers an interactive carbon calculator to help you to calculate your carbon footprint. The calories burned and power generated increase with the higher bike resistance. This technology can prove to be efficient for making the health clubs eco-friendly, wherein they can economize on the cost of power. This will be an amazing way to power the air conditioners, TVs and other appliances in the health club, which will eventually reduce our dependency on coal and other fuels creating a eco-friendly environment. Whelan has also discussed about the versatile technology with the U.S. military. He says:

The military is often in remote places that are hard to get electricity to. From a sustainability standpoint, the Green Revolution technology is great because it creates human powered energy.

In the coming future, Whelan hopes to bring forth a method through which the health club can monitor the amount of electricity generated through workout on the Green Revolution website. Source: RIT