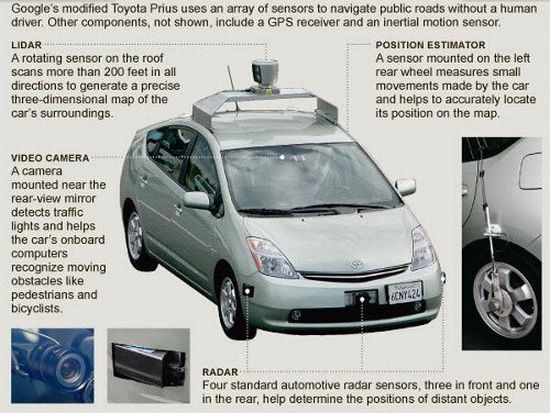 Do not look shocked if you see a driverless car rushing through the road. Google has secretly been developing an autonomous, self-driving robot car, which will flaunt green features too. Using artificial-intelligence software that helps in detecting nearby objects and make decisions like a human driver does, this intelligent car offer safety, comfort and efficiency. The company has successfully completed a test drive of their fleet of intelligent robot vehicles over 140,000 miles around California.

The robot car is said to consume less fuel, meaning reduced carbon emissions. Although robot drivers have an upper hand over human drivers as they react faster, have 360-degree perception and do not get distracted, sleepy or intoxicated, Google still hasn’t completely relied on robot drivers. This robot car requires humans to make announcements such as “approaching a crosswalk” or “turn ahead,” which would alert an individual if a master control system detected anything wrong with the various sensors.

In order to regain power, all you have to do is either press a red button on the dashboard or touch the brake or turn the steering wheel. The test drive has resulted in making the car familiar with the city traffic and changing topographies. Google’s smart green car has succeeded in adapting to the fast-moving traffic, but is still years from mass production.