The hazards of estrogens are not unknown to us; they cause reproductive abnormalities in both animals and humans, and therefore, a cause of concern to environmentalists. Admits all the concerns the one most prominent is the contribution of human activity, which is responsible for releasing harmful chemicals into the waters. In order to identify the presence of estrogen in water, scientists from the University of Exeter have developed a biosensor ‘Zebrafish’ that will glow when exposed to the various types of estrogens. 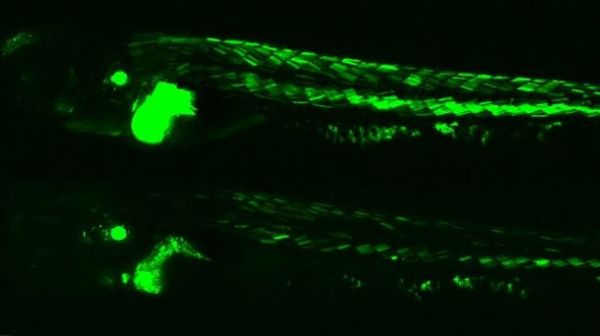 The fish have an estrogen inducible promoter, which helps it to glow and indicate the effects of estrogens on the various body systems. Also these transgenic Zebrafish has helped scientists to study the impacts of Endocrine disrupting chemicals ( EDCs) on various tissues. In fact they have discovered some effects that were previously not observed. Further, they also observed, how exposure to EDCs led to the emergence of green fluorescent protein (GFP) expressions in tissues of the liver, skeletal muscle, heart, ganglion, etc.

Dr. Tetsuhiro Kudoh and Professor Charles Tyler at the University of Exeter, lead the team that has been able to effectively bring progression in our understanding of how oestrogenic chemicals will harm human life and the environment. By precisely localizing where the oestrogens harm the body, these scientists can target the health effect analysis of the hormone disrupting chemicals and help us decipher how the human body will respond to such chemical compositions.