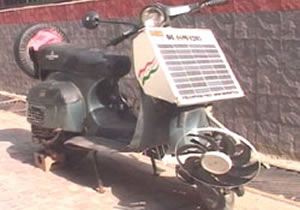 It isn’t necessary that a school dropout is absolutely good-for-nothing and won’t do well in life. If you’ve got plenty of active grey cells then your capabilities need not be bounded by academic performance only. Such is the case of a high-school dropout Rafi Alam. This bloke has shot to fame for his Solar Scooter. Since the hike in petroleum prices hasn’t spared any living soul, this 28-year-old guy was inspired to do something two years back only when there was a similar price hike. And today, he is energized to show off his two-wheeler that he has exclusively redesigned to run on solar and wind energy. Able to run at 80 to 100 km on a full charged battery, this green scooter can gain a maximum speed of 60 km per hour. Though solar powered scooters aren’t too new to us, it’s the fusion of wind energy along with the sun’s energy that has bought this eco-friendly scooter to the glare of publicity.

The prototype is an old scooter fitted with a few electrical gadgets that uses both energies simultaneously to charge a battery that then propels the vehicle.The solar panel is installed on the front of the vehicle while a fan that delivers wind energy has been mounted on the front wheel cap.

Ingeniously designed to generate energy even during the braking process, the scooter also has a small petrol tank for unseen circumstances. However the battery keeps charging itself while the scooter is running on petrol so that the shift can be made after some time. At least you can be sure to not be stranded on the road with a dead scooter.