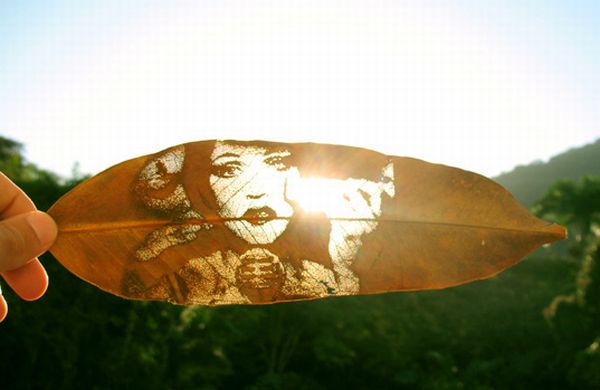 Pictures speak louder than words and since the invention of the press and media technology, most messages find their longest lives when transmitted through pictures. This has led to the development of advertising. Today, when the message of preservation of nature has gained peak importance, it is no wonder that organizations have chosen the print and online media to drum their eco-messages into the minds of the masses. Most often, these advertisements are loud, expressive and intriguing so as to have a stable effect on peoples’ minds. Below are listed ten of the most wonderfully displayed messages.

1. WWF Lungs Before It’s Too Late 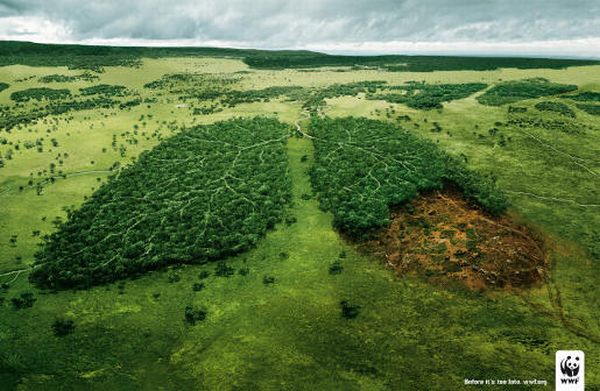 Our forest cover acts as lungs in the bosom of the earth. As humans, we have been thoughtless and senseless about the diminishing forest stretches. If this continues, the very source of fresh oxygen will deplete. And no one depicts the message as well as WWF France has done. The ad has been tagged as ‘Before it’s too late’ and has been produced by TBWA/Paris

2. Green Advertising May Not Always Be Pretty – But It Can Be Effective 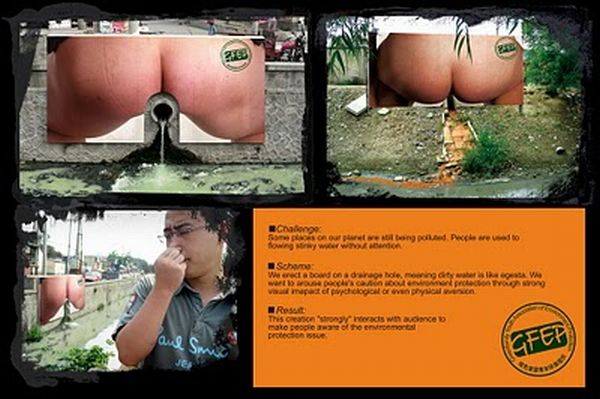 Advertisements showing a polluted sight will have a bigger impact if they can get us to wrinkle our noses. The Greenfamily Youth Association of Environment Protection has come forward with such an ad. They have put on a board a drainage hole with the picture of a man sitting on a toilet. The idea is to show that pollution is nothing less than human waste.

3. Think About What It Consumes Before Buying 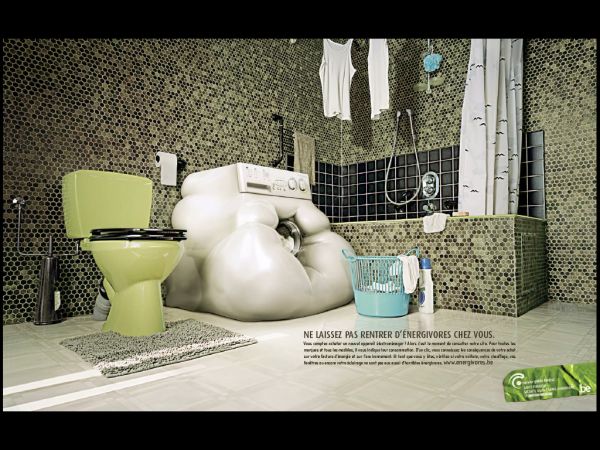 Potent sources of energy consumption are households. This creation by Leo Burnett, meant for the Belgian federal climate change section, eulogizes how excess energy is taxed by the use of appliances. In fact, these people have a website where you can see the amount of energy that goes into home appliances. It provides options to be considered when buying such appliances. 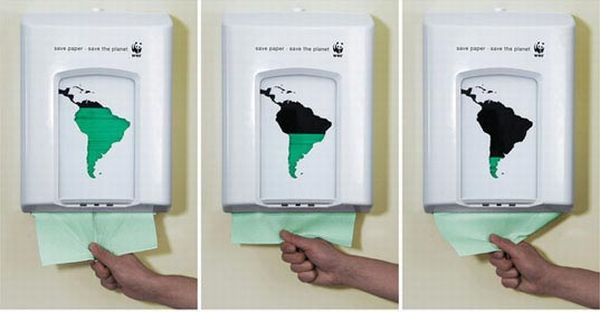 Saatchi & Saatchi has gone through a vigorous toggling of the mind in order to create this piece of excellence for WWF. The organization has come up with a unique way of portraying the effect that paper towels have on the environment. They have used paper towel dispensers with green rolls of towels within which is cut a frame of South America. The more towels you take out, the lesser becomes the green canopy on America.

Design company, Tatil Design, has created a unique form of green marketing campaign. Carving out business logos onto leaves with laser beams helps in multiple ways – no paint used, no plastics used and when thrown away, no harm to the environment. The unique idea won the bronze in the 55th Cannes Advertising Festival. 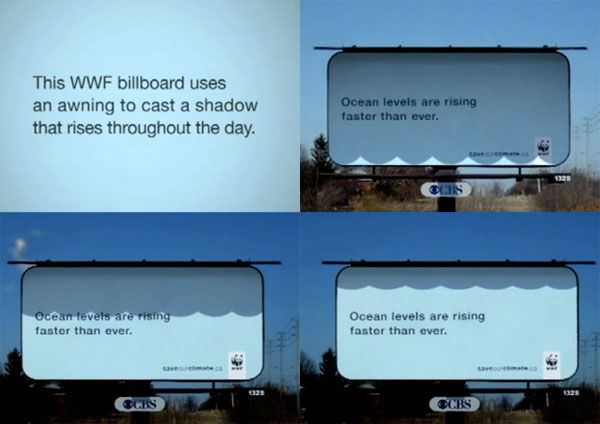 Another piece of sheer intelligence is the canopied billboard erected by WWF. It is designed in such a manner that a canopy remains in motion throughout the day, casting shadows of differing intensities. Looking at the billboard, you would feel that it is actually the picture of sea levels rising. 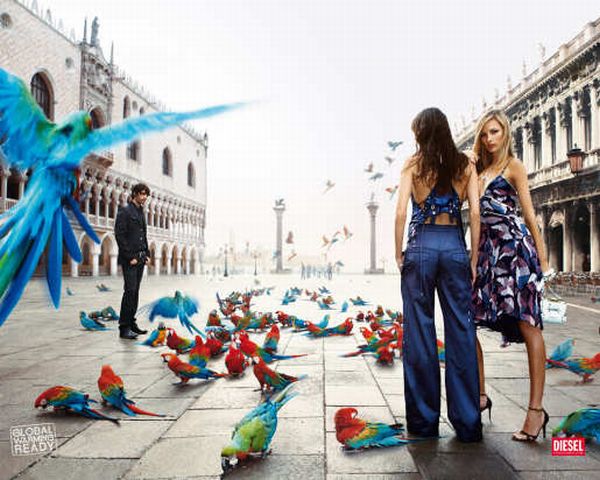 Another corporate fulfilling its social responsibility is Diesel which has come up with its ‘Global Warming Ready’ ad campaign wherein Diesel models pose on a street crowded with a good number of dying exotic birds. The campaign aims at portraying the effect that global warming has on the planet. 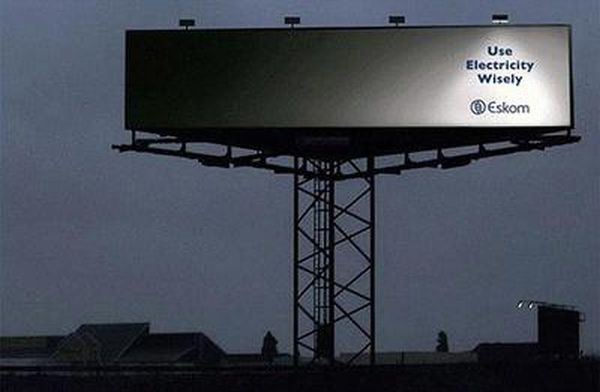 Eskom has come up with an innovative way to communicate its message. When the hoarding gives the message of using electricity sensibly, the neon tube lights up only the portion of the board where the message is written, thus indicating the fact that there’s no use preaching unless practice follows.

9. Denver Water Does It Again 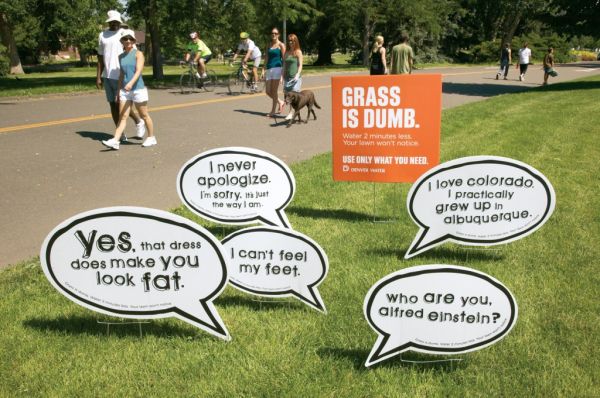 The Denver Water Authority has done a wonderful job in transmitting its message clearly. The ad specifies that water should not be wasted and should be utilized calculatingly since justified usage is beneficial. It shows that watering lawns for two minutes less than the regular time could save a considerable amount of water. 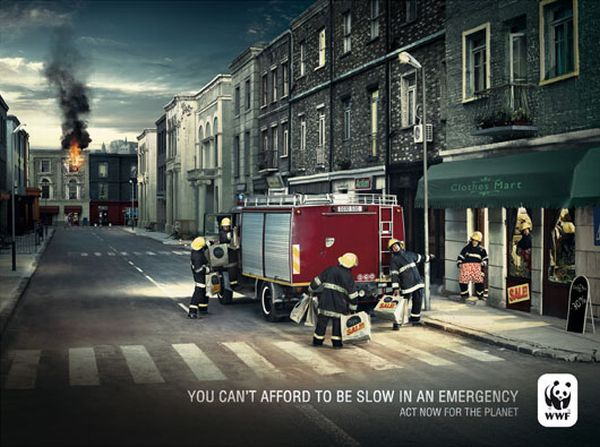 WWF again. The series of print ads show that we are in an emergency situation now with our home planet in danger. The faster we react and rise to the cause, the better would it be for our lives and that of the planet.