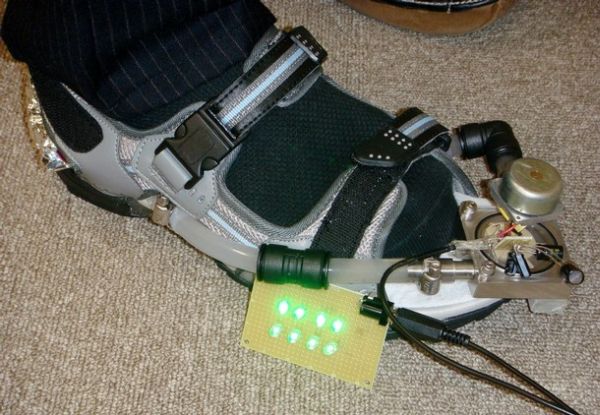 After realizing the availability issues of the non-renewable sources, the renewable sources of energy like wind, water and sun are being constantly and increasingly used by people to generate power. Have you ever thought that you can generate electricity with your footsteps? Energy can neither be created nor be destroyed, but it can be converted from one form to another. Whenever you move your feet your kinetic energy is wasted as heat energy. There are a number of ways to convert the kinetic energy generated by footsteps into usable electric power. Hit the jump to see some of the examples.

Japanese telecommunications giant, NTT has developed shoes that generate electricity from the kinetic energy produced by you while walking. The shoes that look like an orthopaedic sandal are powerful enough to generate 1.2W, which is sufficient to juice up an iPod. The footwear consists of water cushioned soles and whenever you put weight on it, the water sloshes on the mini turbines to generate electric power. Each of the pair of the shoes possesses its own small generator to produce an adequate amount of electricity that can power digital musical device for as long as you want. Well of course, you would have to keep walking or running to yield the requisite energy.

2. “Nanopower” Shoes Could Generate 20W of Electricity During Walking

The energy generated by humans while taking a step forward is around 20W which is lost as heat. But now scientists have found a method of harnessing this precious kinetic energy using metallic microdroplets on the underside of footwear. By utilising this sustainable source of energy and converting it into usable power will prove out to be a better alternative to conventional batteries. Research team from the University of Wisconsin Madison have made a very extraordinary footwear with a substrate that consist of a viscous liquid made of tiny metal microdroplets. Whenever the wearer implies force on the shoe sole while walking, these tiny droplets run through the substrate under pressure to produce electricity by a process called reverse electro-wetting. The technology is being sold in market with the name ‘Instep Nanopower’. This technique will be eco-friendly and will also cost low. The power generated by this method can readily provide enough green energy for your portable electronics like digi cams, mobile phones etc.

The Dutch architectural firm Döll teamed up with environmental organization Enviu to create the green energy producing Sustainable Dance Club in Rotterdam, Netherlands. This club was established to encourage people to live a green and sustainable lifestyle. The project of building this Sustainable dance Club was based on creating green energy from the kinetic energy generated by the clubbers who hit the dance floor. The micro-sensor module which were hidden beneath the dance floor collected the kinetic energy as soon has pressure was implied on the floor and is converted to green electricity. This sustainable energy is used to power the lightening systems of club, the speaker’s etc.

Recently the city officials of Toulouse, France, have installed power-generating tiles in the sidewalks in the city centre. These tiles make use of piezoelectric power technology to generate green electricity. The same modules, which were developed by Dutch company Sustainable Dance Club, as explained above were implied in the city. The embedded micro sensors in eight tiles could generate 50-60 watts of power by the pressure of the footsteps of the pedestrians. This green energy is quite enough to lighten up a nearby street lamp.

The Pavegen Tiles, invented by Lawrence Kembell-Cook, the director of UK Company, Pavegen Systems, can generate green electricity by the foot power of the pedestrians of a busy street. The tiles make use of the dynamo technology and collect the kinetic energy produced by walking over these green tiles. The material used for making the tiles is 100% recyclable. The surface of the tile is created by rubber from old tires while recycled aluminium composes the internal components. Every time a passerby steps on the slab, 5% of the energy contributed is used to illuminate the tile to alert him about his share, whereas, the rest of the energy is stored within the Lithium Polymer batteries to power the surrounding street lamps and even the digital displays. Each tile tends to generate 2.1watts of sustainable energy per hour.