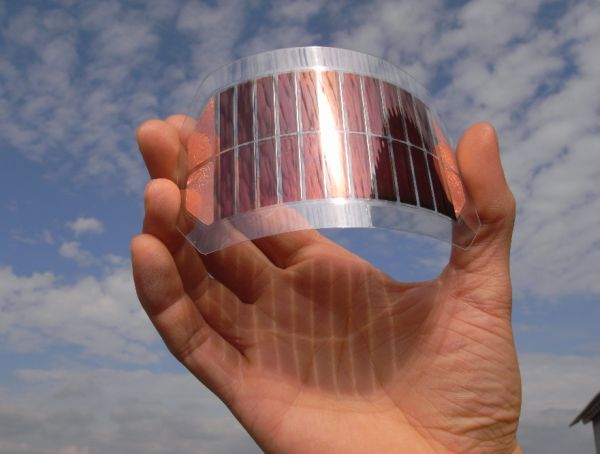 Even the high volume of manufacturing plastic has very low cost. Combining plastic with flexible organic molecules makes it potentially profitable for photovoltaic applications. With the help of chemical and molecular engineering, this material is refined to fulfill the gap of energy. The organic molecules have a property to absorb high amount of light resulting into absorbing large amount light with small amount of material. The main drawback of organic photovoltaic cells is low stability, low efficiency and low strength as compared to inorganic photovoltaic cells.

Trends
Nanostructured Photovoltaic Cells
This project is laid down to make efficient photovoltaic (PV) cells using semiconducting polymers that could be dumped in reel-to-reel coaters. It is required to perform vigilant analysis and optimization of each process occurring in bulk hetero junction PV cells based on which organic and inorganic semiconductors devices will be created based on ordered interpenetrating networks. This research will lead to devices that will be capable of transmitting a charge to electrodes. These devices will have better packing of molecules in organic semiconductors increasing its ability to carry charge with modified organic-inorganic interface to stop recombination of electrons and holes. Hopefully, the charge recombination in the cells will be almost nullified with efficient energy conversion in the range of 10-15%. Large-area roll-to-roll manufacturing of printed electronics and functional films
The ability to print or deposit organic and inorganic molecules in large areas gives novel possibilities for range of applications for large area organic photovoltaic, functional films and printed electronics. A team of A*STAR engineers and scientists are working to find out several manufacturing process challenges as a part of a “scale-up” project carried out by the Singapore Institute of Manufacturing Technology.

The scale-up project is guided by the team of Albert Lu, who is senior scientist and program manager for the Large-Area Processing Program at SIMTech. Lu and his team are following disrupting technology of roll-to-roll manufacturing of organic and inorganic printable functional materials. The process derived from this research can be used for mass-production of both thin and thick film devices like batteries, sensors and photovoltaic cells.

The research team is trying out at how “ink” molecules can be dumped with maximum efficiency on flexible substrates with a width of 1 meter. They are also inspecting the processes for embossing, patterning and laminating functional films along with other techniques for web inspection and mechatronics. Unlike conventional electronic circuit fabrication that involves batch processing of wafers, the large-area processing system involves “new ways to harvest light with low-cost photovoltaic materials,” according to Physorg.com. 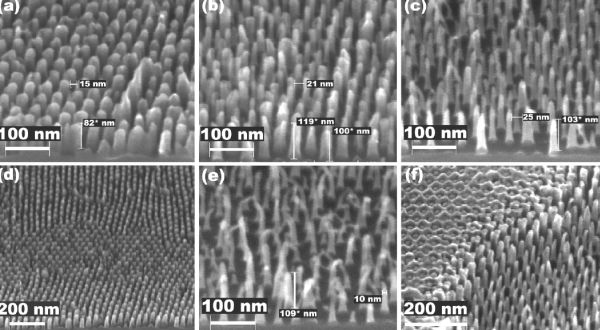 Trapping photons with nanostructures
According to Lu, organic materials are very capable for photovoltaic application, however, it will not be capable enough to take place of silicon. The fact is research to make use of silicon more and more effectively is already going on. Navab Singh, who is the main investigator at A*STAR Institute of Microelectronics of Nano Electronics & Photonics Program, is involved in making microelectronic tweaks to improve silicon utility in photovoltaics. Typical solar cells using silicon are made up of two layers of silicon — n-type and p-type brought together to form an electronic junction.

The electrical current is generated when light reaches silicon, releasing free electrons and hole pairs within a short distance from the junction interface. In classic structure, the number of electron and hole pairs that participate in power generation is comparatively low due to absorption and reflection of light occuring away from the junction. To overcome this limitation, Mr. Singh and his team of researchers are trying to insert hundred of silicon nano-sized photovoltaic pillars on silicon surface. With this nanopillar technology, Singh and his team has successfully demonstrated high current density which was first achieved with nanostructured silicon solar cells.

Still, this process is undergoing further refinement for better performance. The issue of how to design photovoltaic devices making full use of solar energy is still under active discussion. Such application intends to design multiple junctions with various silicon alloy materials and designing structures favoring multiple electrons. 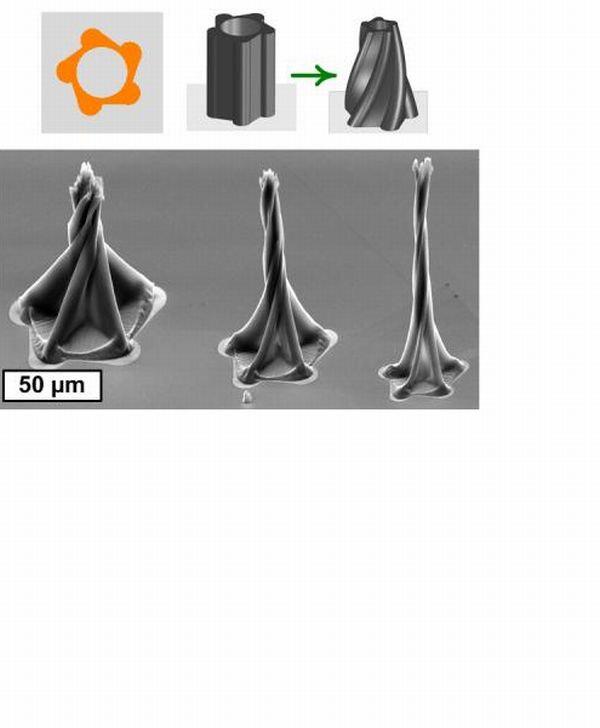 Ordered Nanostructures for Organic Photovoltaic cells
Though potentially a source of clean, renewable energy at a cost even lower than conventional power, organic solar cells are at present far too inefficient. The leading strategy for making efficient organic cells is to create nanoscale ordered bulk heterojunctions.

In this work, we used Nanosphere Lithography and Block Copolymer Lithography as methods to pattern Cr nano-dots on Si for use as masks during reactive ion etching (RIE). With these techniques we were able to produce arrays of Si pillars on the order of 120 nm tall and 20 nm wide, which are very close to the ideal length scale. Devices employing these nanostructure substrates have not yet been tested, but exciton splitting, charge collection and overall cell efficiency are expected to be improved. In the near future, devices utilizing these structures in the heterojunction will be made and tested.

Additionally, the entire process of making the pillars and devices should be optimized to maximize efficiency. Ultimately, this knowledge and technology may need to be transferred to some material other than Si, such as titanium.

The benefits and limitation of organic photovoltaic can be better understood in terms of material properties. The basic building block of silicon solar cells is the atom while that of organic cells is the molecule (which is collection of well-defined group of atom). This basic difference has most of the implication on the performance of organic solar cells.

Molecules which are larger than atoms makes task easier to work with. Due to this, it becomes easier to make new designs with molecules; almost anything can be formed with molecules. On the other hand, it is difficult process to entirely make new material from atom. The numbers of molecules that are used in an organic cell are limited by the imagination of synthetic chemist, which means that organic solar cells can be custom-made for a particular need or application.

For example, Konarka located in Massachusetts can manufacture cells with variety of color schemes, including cells that are cloaked for their military customers. The researchers have a hope that molecules can be designed and developed more effectively with vigilant design and repeated tweaks to meet three basic criteria required to create successful solar cell: efficiency, cost and long life.

Benefit of organic solar photovoltaic cells is opening of entirely new industry of photovoltaic. For example, Merck, BASF and Dow have recognized that with large scale manufacturing of organic solar cells can give them potential market for their products. These companies have committed considerable funds and manpower to encourage the development of organic photovoltaic research to ensure their place in future market.

The ability of organic photovoltaic to choose the molecule that absorbs solar light efficiently is another benefit of this technology. Due to this, organic solar cells can be designed and developed 1000 times thinner than silicon solar cells resulting into minimum use of material. Due to its minimum thickness, this cells are flexible that could be printed on roll-to-roll process that is transported easily and simply unrolled on customer’s roof. Along with others, Konarka is also developing cells which can be used in clothes and tents.

The Downsides
The electrical charges should be able to travel quickly and efficiently to extract electricity from solar cells. If they are incapable to exhibit this efficiency they are likely to stuck or recombine with other charges and disappear altogether. Due to this, the number of useful electrical charges required to work like recharging battery diminishes. This is merely impossible to get charges out of silicon solar cell because atoms are carefully arranges into crystals makes charges fly between them at comparatively higher speed. However, molecules are comparatively less ordered, especially when printed as a result of which charges flow at lower speed.

To make problem more acute, the molecules hold into charge very tightly reluctant to pass charge to their neighbors. Due to this electricity cannot flow easily making the limitation of an organic solar cell. Even the more depressing problem is not only getting electrical charges out of organic solar cells but also a problem of generating them. Solar cell absorbs solar light to gain energy, but in this uncomfortable state, it tries to discharge that energy. Ideally this happens as a result of generating two charges but it merely throws this energy away as heat.

Solar cells are designed to overcome first problem: as it consists of two doped regions that attract positive and negative charges while organic cells tries to give same effect using two different types of molecules. The process transforming sunlight into electricity is very efficient in silicon, while it is less in organic cells.

Besides poor generation and extraction of electrical charges the further lack of efficiency of organic photovoltaic is its life. The material that uses atoms generally last for long time, while in comparison with material made from molecules typically react with other molecules like oxygen and water which diminishes its life. In this condition, molecules might absorb less light or generate few charges or actually trap charges and stop them from being collected. This characteristic is regrettable but ironic fact is that molecules tend to degrade in this way before they are illuminated.

Impacts
The successful commercialized application of solar energy is based on three main criteria: efficiency, cost and life. However, the initial excitement in organic photovoltaics was the expectation was being very cheap application. First, chemical manufacturing companies already develop organic molecules by kiloton at quite a reasonable cost. Second, making an organic solar cell is merely messy as compared to making of silicon solar cells. However, efficiency and life are also like obstinate thorns in the side that advocates organic photovoltaic: efficiency waivers around 5%. Ironically, organic material tends to degrade in light.

The establishments any new technology in the market has to overcome lot of hurdles before the finished products get introduced in the market. However, the excitement is growing worldwide with the evidences to the potential organic photovoltaic; with an alliance with German government, Bosh, BASF among others who recently declared the organic photovoltaics research program to fund in the amount of US $570 million. Organic Photovoltaic has to complete journey competing with silicon; however, it would open niche markets with serious backing which would be surprising if anybody fails to make money from molecules at some point.